American singer and actress, Brandy has reportedly been hospitalized at an LA area hospital and recovering from what is believed to be a possible seizure. 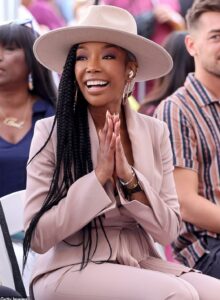 The 43-year-old actress was at home when the medical emergency occurred on Tuesday, October 11, according to TMZ.

She appears to be in recovery, per the outlet, with her parents with her at the hospital.

The outlet noted that it is unknown if there were any other health issues that led to the medical emergency. Brandy is currently still in the hospital, per TMZ.

Their insider believes the star suffered a seizure but it has not been confirmed.

In the since-deleted posts, one video showed the star’s legs hanging over a ledge, while he asked if he should ‘just jump off.’

Despite the posts, a source informed TMZ Ray J had been drinking at the time and that he is now doing well.

Earlier this year, Brandy released a song with daughter Sy’Rai called Nothing Without You.

In June 2022, she revealed she is working on her eighth studio album.