President of the United states, Joe Biden has revealed he would be open to meeting with Vladimir Putin if the Russian president was willing to discuss the release of imprisoned WNBA star, Brittney Griner.

Speaking with CNN’s Jake Tapper Tuesday night, Biden said that would be the only reason he would talk with Putin at the G20 summit in Indonesia next month. 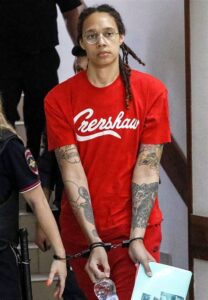 “Look, I have no intention of meeting with him, but look, if he came to me at the G20 and said, ‘I want to talk about the release of Griner,’ I would meet with him, but that would depend,” Biden said.

He again spoke about the possibility while addressing reporters outside of the White House on Wednesday, according to Reuters. Biden also said that there has been no movement from Putin on the possibility of a prisoner exchange with Griner and another American imprisoned in Russia, Paul Whelan.

Biden told Tapper that he doesn’t believe there is a need to speak with Putin outside of specific issues, while alluding to the war Russia has waged against Ukraine since February.

“He’s acted brutally, I think he’s committed war crimes, and so I don’t… see any rationale to meet with him now,” he said on CNN.

In August, Griner was sentenced to nine years in prison. The sentence came after she was arrested at a Russian airport in February when officials allegedly found vape cartridges containing hash oil in her luggage.

Since then, the Biden Administration’s attempts to negotiate with Russia for Griner’s release have been unsuccessful, including a “substantial offer” made by U.S. Secretary of State Antony Blinken.

Meanwhile, Griner’s lawyers in Russia have filed for an appeal, and a Russian court set Griner’s first appeal hearing date for Oct. 25.

“I Did Not Sign Whitemoney To My Record Label”- Singer, Banky W Reveals Weeks After The Bbnaija Winner Announced Record Label Deal (VIDEO)