Dancer Korra Obidi’s ex-husband, Justin Dean, has explained why he started dating again barely a year after their divorce.

Recall that the duo got enmeshed in a messy separation saga shortly after the birth of their second child. 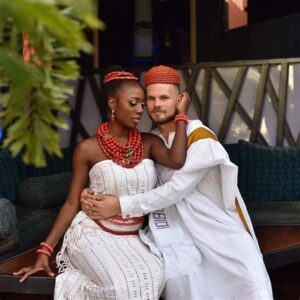 Though he claimed he doesn’t have plans to remarry and would rather focus on his kids at the moment, the father of two had also been spotted having a date night with another lady.

Dean shared a video of him and the lady identified as Tokumbo Daniel taking a stroll with the caption “Date night.” The write-up was accompanied by some love emojis.

In a new Question and Answer session on Instagram, he confirmed he is dating again. When asked why he’s dating again barely a year after his divorce from Korra Obidi, Dean gave the response YOLO, meaning ‘You Only Live Once’. In other news, A Twitter user identified as Ademola has refused to buy an alleged domestic vi0lence story by Gbemi Beauty, an ex-girlfriend to Bbnaija level housemate, Sheggz.

Recall Gbemi, who once claimed to be Sheggz Ex, revealed how Sheggz beat and injured her severely when they were dating.

Ademola debunked her narratives, he wrote; “A man will never get away with physical abuse or domestic violence in UK, why has she changed the story to suit the BBN narrative? Every right thinking person knows who the real victim is #BBNaija

“‘He abused you verbally and emotionally’, and in the process you kept quiet and soaked it all in? You didn’t respond? Did you abuse him or not? I believe it’s an altercation and none of our business, good luck trying to tarnish his image.

“It’s just so sad to see some of these allegations, remember a lady almost ruined Partey’s career, some people still believe he’s guilty even after the UK police cleared him of all charges, 21st century madness #BBNaija.

“I’m so happy because Sheggz will be amongst the most successful BBN Housemates, it’s surer than taxes, your hate won’t define him.

“Nigerian Twitter Supreme Court, one day your siblings/relatives will be accused of a greater offence, na here we dey #BBNaija.

“If a Nigerian Senator can be arrested in Uk, why do you think Sheggz would be spared if he truly did abuse her, most of you are in your feelings because you don’t like the dude #BBNaija.”

“What My Team Asked Me To Do Incase Bella Doesn’t Support Me”- Sheggz Reveals In Latest Arise TV Interview , Says He Misses Her So Much