A young man has been captured on tape driving past a police checkpoint at high speed nearly hitting a policeman in the process.

In a short video posted online, the motorist could be seen breaking the line and zooming off while police officers were checking a car in front of him.

The officers had to swiftly move out of the road when they saw him driving. He passed their van which was parked a short distance from the checkpoint.

Some other officers who were standing a few metres ahead tried to stop him but he drove past them smiling. 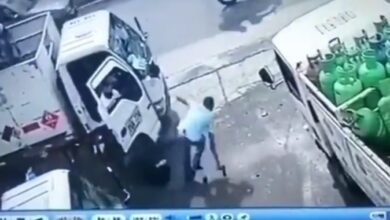 Armed robber flees after gas vendor knocked him down with cylinder