Nollywood actress, producer and businesswoman, Uche Ogbodo has called out Nigeria fans over their constant negativity and body shaming. 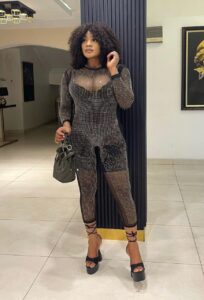 Speaking to Nigerian fans, the actress said she’s drained with negative comments asking if someone can’t have natural shape in peace. 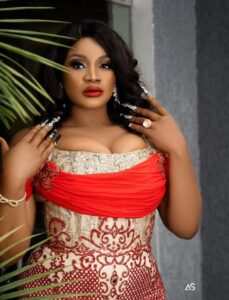 Further talking, Uche claimed she don’t care about the negative comments, eventhough it hurts to know that the only thing one can get from Nigerian fans are negativity and Body shaming. 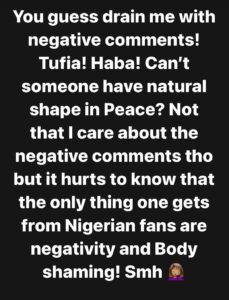 In her words; “Your guess drain me with negative comments!

“Tufia! Haba! Can’t someone have natural shape in Peace? Not that I care about the Negative comments tho but it hurts to know that the only thing one gets from Nigerian fans are negativity and Body shaming! Smh🤦‍♀️”

Uche Ogbodo was born on the 17th of May, 1986, and she is currently 35 years old. She is a native of Enugu State, and she was also raised there.

Uche Ogbodo noted that her father was the brain behind her acting career. According to her, he encouraged her to venture into acting and enrolled her into an acting academy.

In addition to acting, Uche Ogbodo is also a fitness enthusiast. The passion was initiated by a difficult phase she experienced in her life. According to her, she realised that many women go through depression due to post-natal body changes and she decided to put in the work to lose weight to serve as a motivation for other women.

“Beauty Is A Totally Different Person From What We Saw On TV, She Wasn’t Used To Alcohol”- Davido’s Manager, Prince Says As He Shares Photos With Beauty Tukura