Nigerian singer, Habeeb Okikiola aka Portable has been ridiculed after Davido’s uncle, Senator Ademola Adeleke emerged as the winner of the Osun state governorship election.

Recall that Portable had campaigned for Governor Gboyega Oyetola of the All Progressive Congress (APC), while Davido was campaigning for his uncle, Senator Ademola Adeleke of the People’s Democratic Party (PDP).

Portable’s support for Davido’s uncle’s opponent had left the singer displeased with him. This led to OBO unfollowing on social media.

Reacting to this, Zazzu did a video where he mocked Davido, saying he is from a wealthy whereas he made his own family rich.

Portable has now been subjected to mockery following the emergence of Davido’s uncle, Senator Ademola as Osun State governor.

Reacting to this, netizens dragged Portable to filth for betraying Davido.

ronkeyzee wrote: Make Portable sweep the whole of Osun with broom before going back to Lagos

mide_fwesh wrote: What will Portable beg for again now APC lost to PDP lmao. In this life make we get sense and also lastly no be everything be gra gra!!

misschide wrote: Portable will not like this ooo. So y’all he ready for war 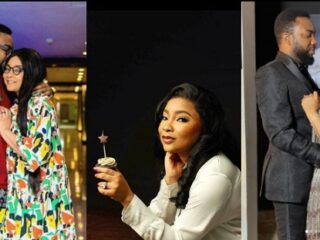