Nollywood actress, Moyo Lawal, has stirred up Reactions on social media after making a claim of spending 500k plus on groceries. This news is coming after influencer Ashmusy revealed she spends 2 million naira daily.

How can someone be using half a million for grocery shopping and it is not even enough 😩😭😭….. …. … p.s ayam buying anything with my money again 😩😭😭… … can I come to get groceries from ur house because I am done oooh 😩😭…. …

My dear i just Spent 5 million Naira to fuel my Car from Lekki to Ajah! This Country Eh! 😂😂😂😂 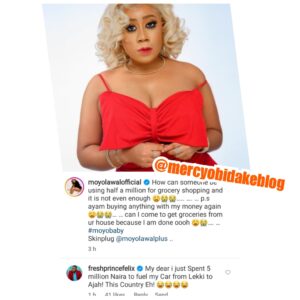 Moyo Lawal is a popular actress in Nigeria who was born in Badagry town and received primary, secondary, & tertiary education in Nigeria. She obtained her BSc degree in Creative Arts from the University of Lagos. 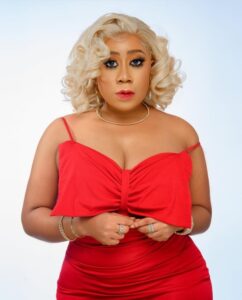 She said she is yet to have children because it is hard work. She is also single.

Lawal began acting in small play productions when she had been convinced to venture into acting by a friend of hers whilst in school. She took part in the Next Movie Star Nigerian TV reality show but was unsuccessful in it.

“Wahalur For Housemate Wey Nor Get Fanbase”- Reactions As Bryann, Beauty & Phyna’s Fans Flood Airport In Capetown To Welcome Them (VIDEOS)