A video of a heavily pregnant Jada Pollock at Wizkid’s birthday party is currently trending online.

Recall that the couple first met in 2012.

However, their relationship was made public in 2017 after they welcomed their son, Zion, who is Wizkid’s third child.

The couple also sparked a breakup rumour after Jada called out Wizkid over domestic violence. Back then, nobody knew if they were still together

Just recently, it was alleged that Wizkid and Jada Pollock are expecting their second child and this sparked speculation that they are back together.

The pregnancy speculation was then confirmed after Big Wiz shared a glimpse of a pregnant Jada via his Instagram story.

On Saturday, July 16th was the singer’s 32nd birthday and he was treated to a special birthday dinner.

In a video currently trending online, the heavily pregnant soon-to-be mum of two was seen taking video and photos of her man as he cut his cake. 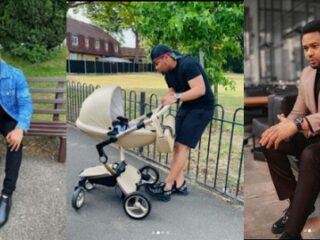