Popular Gospel singer, Mercy Chinwo has won the African female Gospel artist of the year at the 2022 Clima awards.

The sixth edition of the 2022 Clima award was held at the Muson center, Lagos Nigeria on Sunday, the 9th of October.

Mercy Chinwo won after she was nominated in the category of the Africa female Gospel Artist of the year. 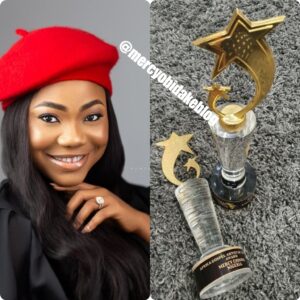 She was nominated alongside with other popular female Gospel artists ,such as Ada Ehi,Empress Giffty, Sinach, Diana Hamilton,Lebo Sekgo Bella , Chioma Jesus , Chidinma and Ohemaa Mercy.

Mercy Chinwo could not hide her joy and excitement as she took to her Instagram page to celebrate her victory.

“You Only Started Trending When I Came Out…..I Go Drive Come Your House B£@t You”- Phyna Thr£@t£ns A Certain Housemate Because Of Her Fans