American R&B singer, Brandy Norwood has given an update about her health condition after been hospitalized. 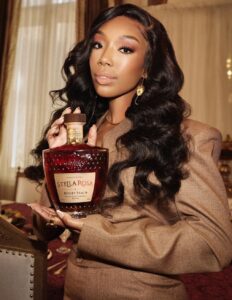 The “Boy Is Mine” singer, 43, shared in an Instagram Stories post on October 12, that she’s “following doctors’ orders and getting the rest I need due to dehydration and low amounts of nutrition.”

“Thanking fans for sending love and light my way,” she added, “Grateful for you all, see you soon.” 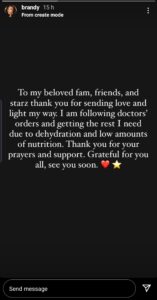 The health update comes a day after Brandy was reportedly taken to a Los Angeles hospital on Oct. 11 after suffering a possible seizure, according to TMZ, which cited sources with knowledge of the situation.

According to the outlet, the Moesha alum had her parents by her side at the hospital.

Back in 2017, Brandy was also transported to the hospital after losing consciousness on a flight at Los Angeles International Airport. “She has been traveling extensively as part of an ongoing tour and several personal appearances,” the Queens star’s team said in a June 2017 statement after she was released from the hospital. “In recent days, she has taken more than 10 long haul flights including internationally. She was in the studio all night last night until it was time for her to leave the airport to catch a 5:45 a.m. flight.”

The message added, “The stress of all the traveling and working so incessantly has exhausted her.”

“My Heart Is Broken, Why Do Good People Keep Dy!ng?”, Actress, Ifu Ennada Questions God If He Really Exist