BBnaija star, Saskay, has revealed the experience she had with Late Nollywood actress, Ada Ameh on a movie set.

She revealed this while paying tribute to the deceased on Twitter.

Recall that ‘The Johnsons’ star, collapsed and died around 11 pm on Sunday in Delta state.

The news of her death comes after she opened up on her battle with mental health. Ada had revealed that the issue was gradually taking her life.

However, she stated that she believes that she will not die and will get over it.

Taking to her Twitte page to mourn Ada Ameh, Saskay described her death as ‘sad’, adding that she experienced grief while alive.

The reality star went on to recount how she met her once on set and how sweet she was.

“I met this woman once on set and she was so sweet like she had known me before.

“All I could think of was the grief she was experiencing, cause I had seen several videos where she spoke about her mental health. This is really sad. Rest well Ada Ameh.” 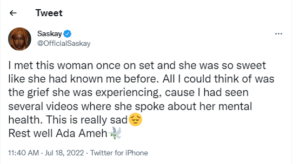 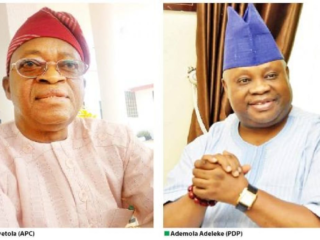