Young man known as Jaylen Smith was elected the mayor of Earle, Arkansas, on Tuesday night, Dec. 6, becoming the youngest Black mayor in the United States. 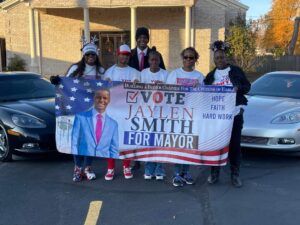 Smith went to Facebook to announce his victory in a post. “It’s Time To Build A Better Chapter of Earle, Arkansas,” said the newly elected mayor.

On Tuesday night, Smith defeated Nemi Matthews Sr., 59, in a runoff election. The teenager finished with 218 votes compared to Matthews’ 139.

In an interview with FOX 13 last month, Smith, who recently graduated from Earle High School and still lives at home with his mother, talked about the goals he wants to accomplish as mayor.

“First, I want to improve public safety here,” he said. “Secondly, tear down abandoned houses… transportation here for the community and bring a grocery store here.”

He added that he will continue his bachelor’s degree online at ASU Mid-South in Memphis, but will make the city his main priority.

Being young with no political experience doesn’t bother the Arkansas native. He compared his newly elected position to being a new hire at any job.

“You know when you first get a job somewhere,” he said. “You never know what you’re getting into. At any age, you can do what you want.”